U.S. elections are only a marginal exercise in democracy 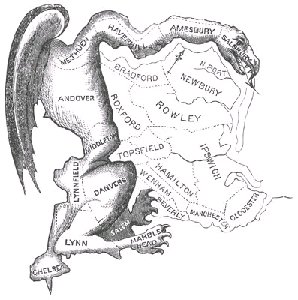 How often have you heard someone complain that “my vote doesn’t count.” We shake out heads at these silly and obviously apathetic people and give them the politically correct response: “Every vote counts.” The problem is all too frequently the complainer may very well be right – their vote doesn’t count.

Let’s ignore the Elector College system for the time being and look at the upcoming congressional elections. Out of 435 congressional races, a pitiful small number are actually up for grabs. Whatever the results of the election in November the outcome will have less to do with reflecting the will of the people than with the corrupt system of redistricting to guarantee the safety of incumbents.

For example, currently the Democratic Party is leading the Republican Party in all national polls by substantial margins. The election is still a month off and a lot can happen one way or another to change those poll numbers. But let’s imagine the election is held tomorrow. Will the Democrats then win the House of Representatives by a similar substantial margin? No. IF the Democrats win a majority (and that’s a big “if”) they will rule with a slim majority. Why? Because the system is rigged in favor of the incumbent party.

Bruce Reed explains it this way in Slate:

Even so, the Election Scorecard average of those five polls, all
conducted at the end of last week, gives Democrats a whopping 17-point
advantage. In a presidential election, a 17-point win would produce a 500+
electoral vote landslide. In 1994, Republicans took back the House by winning
the popular vote by seven points—51.5 percent to 44.7 percent—and picked up 54
seats.

Yet even after poring over this week's bleak poll numbers, Karl Rove
isn't completely crazy to imagine his party holding onto the House in November.
Democrats aren't likely to win the popular vote by seven points, let alone 17.
But what's really keeping Rove's dark hopes alive is the Safehouse that Jack and
Tom Built—the firewall of safe districts that could enable the Republican party
to survive what would otherwise be a China-syndrome political meltdown.

If congressional districts were truly representative, a party that won
a seven-point victory in the popular vote would walk away with a 7 percent edge
in the 435-member House of Representatives, or roughly a 30-seat majority. For
Democrats, that would represent a pickup of around 45 seats.

In a Category 5 political tsunami, anything is possible. But a
cold-eyed look at the districts in play shows the tough slog Democrats have,
even in a banner year, just to get to a simple House majority.

That's no reason to discount Democrats' chances of taking back the
House in November. In each of the top 30-40 races, it's quite possible to see
how the Democrat can win. But Democrats need to remember about the House what we learned the hard way about the Electoral College—even with a popular majority, we still have to run the table.

Gerrymandering has always been with us but it has gotten a lot more sophisticated with computer technology. To make matters worse, redistricting is becoming a free-for-all whenever the state legislatures wish to change boundaries thanks to the efforts of former Majority Leader Tom Delay.

This problem won’t be fixed before this election but it can be on the agenda for electoral reform in the future. This blog has argued before for the following reforms:

First, amend the U.S. Constitution taking away the guarantee each state has at least one representative in the House of Representatives. The consequence of the current system is that small states have a disproportionate amount of power and districts from state to state represent varying numbers of people. Congressional districts should have equal population regardless of state lines.

Second, standards for congressional redistricting every ten years should be nationalized and the redistricting itself turned over to independent and bipartisan commissions. The commissions would consider the following criteria: Adherence to the U.S. Constitution and Voting Rights Act; Equal population from district to district; Contiguity and compactness of the district, and; Maintenance of traditional boundaries (counties or parishes, cities, towns, voting precincts). They would specifically not take into account voting history, party affiliation of voters or effects on incumbents. This process is very similar to what parliamentary systems in Europe use.

We can all hope but don’t be surprised if there are not substantial changes reflecting the will of the people this November. And, the next time you hear someone complain that their vote doesn’t count remember the enemy is not apathy but the system.
Posted by Sisyphus at 10:58 PM