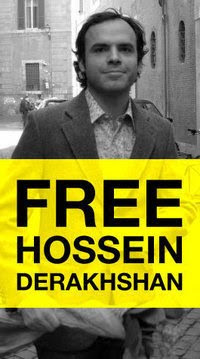 Iranian blogger, Hossein Derakhshan, has been sentenced to 19.5 years in prison and banned from participation in political parties and the media by an Islamic Revolutionary Court in Iran. Mr. Derakhshan was arrested in 2008 for his blogging activities, detained for the past two years, tried in July and sentenced this week. The arrest and harsh sentence was despite his increasingly favorable assessments of the Iranian government before his arrest.

The fuller story from CNN:

An Iranian court has sentenced the so-called "blogfather" of Iran to 19½ years in prison, the semi-official Mashregh news website said Tuesday.

The 35-year-old Canadian-Iranian blogger and activist was also banned from journalistic endeavors and from joining any political parties for five years.

Derakhshan was arrested on November 1, 2008, and is being held at the Evin Prison in Tehran, reported the International Campaign for Human Rights in Iran.

Hadi Ghaemi, executive director of the International Campaign for Human Rights in Iran, condemned the sentence.

"This is the longest sentence issued against a blogger in Iran, and it is solely because of his opinions and blogging. The sentence is meant to send a chilling message to the Iranian youth to stay away from the internet in practicing their freedom of expression," Ghaemi said.

Derakhshan's blog, titled Editor Myself on i.hoder.com, gained worldwide notoriety. He got particular attention for helping other Iranians start their own blogs with step-by-step start-up guides published in Persian.

Derakhshan also blogged on many political issues including freedom of expression, the Islamic Republic of Iran and Israeli relations in the Middle East.

In 2006 Derakhshan shocked his followers when he visited Israel on his Canadian passport.

"He was reporting his trip minute by minute on his blog ... in both English and Persian. It was the first time that an Iranian was reporting the real life in Israel," Hamed Derakhshan said.

"He felt Ahmadinejad was doing good for Iran. At that point many Iranian bloggers didn't like his ideas. He believed in the system. He did not believe it was perfect, but he thought he could work with the system and make it better," Hamed Derakhshan said.

Despite his recent favorable writings on Ahmadiejad, the authorities still did not trust him and considered him a “counter-revolutionary blogger.” This is quite consistent with the Iranian elite’s intolerance of any dissent and attempts to crack down on independent blogging.

A Facebook group advocating for Derakhshan’s freedom can be found here.
Posted by Sisyphus at 12:28 PM