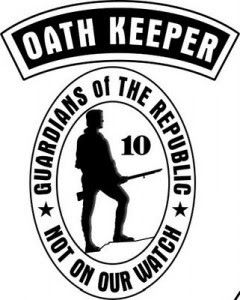 It’s never clear as to how serious to take political fringe groups that peddle paranoia. They are nothing new to the political scene of any country and in this one they have an absolute First Amendment right believe and say what they wish. On the other hand, the nonsense they promote can sow seeds of violence by convincing those without a firm grasp of reality that they are in danger and must act. Timothy McVeigh, a Gulf War veteran, was one who became convinced of the tyranny of the American government and acted on this conviction by killing 168 people by bombing the Federal office building in Oklahoma City in 1995.

News comes of a new group, the Oath Keepers, urging military and law enforcement personnel to disobey orders they deem unlawful. Their list of orders they would refuse include a few that sound downright civil libertarian such as the refusal to conduct warrantless searches and refusal to detain American citizens as “unlawful combatants” but others are completely loopy such as refusal to turn American cities into concentration camps and assisting foreign troops on U.S. soil against the American people. The suggestion of these latter points and similar items is that the country is on the verge of this actually happening.

The group is planning a national conference in Las Vegas later this month. The Las Vegas Review-Journal has this:

… Oath Keepers bills itself as a nonpartisan group of current and retired law enforcement and military personnel who vow to fulfill their oaths to the Constitution.

More specifically, the group's members, which number in the thousands, pledge to disobey orders they deem unlawful, including directives to disarm the American people and to blockade American cities. By refusing the latter order, the Oath Keepers hope to prevent cities from becoming "giant concentration camps," a scenario the 44-year-old Rhodes says he can envision happening in the coming years.

It's a Cold War-era nightmare vision with a major twist: The occupying forces in this imagined future are American, not Soviet.

"The whole point of Oath Keepers is to stop a dictatorship from ever happening here," Rhodes, a former Army paratrooper and Yale-trained lawyer, said in an interview with the Review-Journal. "My focus is on the guys with the guns, because they can't do it without them.

"We say if the American people decide it's time for a revolution, we'll fight with you."

That type of rhetoric has caught the attention of groups that track extremist activity in the United States.

In a July report titled "Return of the Militias," the Alabama-based Southern Poverty Law Center singled out Oath Keepers as "a particularly worrisome example of the Patriot revival."

The Patriot movement, so named because its adherents believe the federal government has stepped on the constitutional ideals of the American Revolution, gained traction in the 1990s and has been closely linked to anti-government militia and white supremacist movements.

The movement is blamed for spawning Timothy McVeigh, who bombed a federal building in Oklahoma City in 1995, killing 168 people.

"I'm not accusing Stewart Rhodes or any member of his group of being Timothy McVeigh or a future Timothy McVeigh," law center spokesman Mark Potok said. "But these kinds of conspiracy theories are what drive a small number of people to criminal violence. ... What's troubling about Oath Keepers is the idea that men and women armed and ordered to protect the public in this country are clearly being drawn into a world of false conspiracy theory."

One member, in a videotaped speech at an event in Washington, D.C., calls Obama "the domestic enemy the Constitution is talking about."

According to the law center, militia groups are re-emerging in this country partly as a result of racial animosity toward Obama.

As mentioned above, the Southern Poverty Law Center is concerned about the group. Here is what they have to say about the Oath Keepers in a recent SPLC report on the resurgence of far-right militias:

Oath Keepers, the military and police organization that was formed earlier this year and held its April muster on Lexington Green, may be a particularly worrisome example of the Patriot revival. Members vow to fulfill the oaths to the Constitution that they swore while in the military or law enforcement. "Our oath is to the Constitution, not to the politicians, and we will not obey unconstitutional (and thus illegal) and immoral orders," the group says. Oath Keepers lists 10 orders its members won't obey, including two that reference U.S. concentration camps.

That same pugnacious attitude was on display after conservatives attacked an April report from the U.S. Department of Homeland Security (DHS) that suggested a resurgence of radical right-wing activity was under way. "We will not fear our government; they will fear us," one man, who appeared to be on active duty in the Army, said in an angry video sent to the Oath Keepers blog. In another video at the site, a man who said he was a former Army paratrooper in Afghanistan and Iraq described President Obama as "an enemy of the state," adding, "I would rather die than be a slave to my government." The Oath Keepers site soon began hawking T-shirts with slogans like "I'm a Right Wing Extremist and Damn Proud of It!"

In April, Oath Keepers founder Stewart Rhodes — a Yale Law School graduate and former aide to U.S. Rep. Ron Paul (a Texas Republican and hard-line libertarian) — worried about a coming dictatorship. "We know that if the day should come where a full-blown dictatorship would come, or tyranny … it can only happen if those men, our brothers in arms, go along and comply with unconstitutional, unlawful orders," Rhodes told conspiracy-minded radio host Alex Jones. "Imagine if we focus on the police and military. Game over for the New World Order."

It's not known how large Oath Keepers is. But there is some evidence beyond the group's mere existence to suggest that today's Patriots are again making inroads into law enforcement — the leak of the DHS report, along with those of a couple of similar law enforcement reports, was likely the work of a sworn officer. Rhodes claims to know a federal officer leaked the DHS report, and says Oath Keepers is "hearing from more and more federal officers all the time."

The group does seem to be on the radar of federal law enforcement officers. In May, a member complained on the group's website of a visit to his farm by FBI agents who asked him, he said, about training he provides in firearms, survival skills and the like.

One Oath Keeper is longtime militia hero Richard Mack, a former sheriff of a rural Arizona county who collaborated with white supremacist Randy Weaver on a book and who, along with others, won a U.S. Supreme Court decision that weakened the Brady Bill gun control law in the 1990s. "The greatest threat we face today is not terrorists; it is our federal government," Mack says on his website. "One of the best and easiest solutions is to depend on local officials, especially the sheriff, to stand against federal intervention and federal criminality." Mack's views echo those of the Posse Comitatus, which believed that sheriffs are the highest law enforcement authorities in America. "I pray for the day that a sheriff in this country will arrest an IRS agent for trespassing or attempting to victimize citizens in that particular sheriff's county," Mack said in a video he made for Oath Keepers.

It's pretty pathetic that you have to pull out Obama's race in order to discredit such an organization. In doing so, you only succeed in discrediting yourself.

Are you that incapable of defending Barry's policies as consistent with the Constitution? If you can't, perhaps you should consider that these people --- misguided though they may be --- might just have a point.