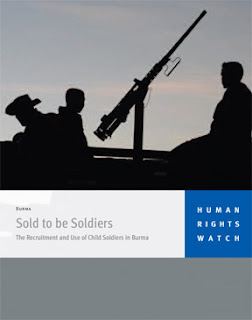 The Burmese military is forcibly recruiting children to fill the gaps in the country’s armed forces as adult desertions climb and enlistments plummet according to a new report by Human Right Watch. According to the Independent, “Finding it increasingly hard to recruit adult soldiers, and trying to cope with high desertion rates and a constantly expanding demand for fighters, army recruiters pick on children at bus and train stations and force them to join up.”

The children are frequently sent into combat in Burma’s border areas where it is fighting ethnic liberation movements.

The Burmese army is forcibly recruiting children to cover gaps left by a lack of adult recruits, says a report by a US-based human rights organisation.
Human Rights Watch (HRW) says children as young as 10 are beaten or threatened with arrest to make them enlist.
Both the army and ethnic rebels have been accused of using children before.
But the timing of this report is particularly damaging for the military, which is already under pressure after a crackdown on anti-government protests.
The military insists it is opposed to the use of child soldiers, but HRW says the abuses were extensive and systemic.
It said it had published the report to try to urge the United Nations Security Council to tackle the issue.
The report, entitled "Sold to be Soldiers: The Recruitment and Use of Child Soldiers in Burma" says there are thousands of children in the Burmese military.
It claims that children are approached in public places by military recruiters and civilian brokers who have been promised cash rewards by the military.
The children are often beaten or threatened with arrest to force them to enlist, the report says.
It is claimed that recruiting officers routinely falsify enlistment documents to register children as being 18, the legal minimum age for recruitment.
***
Jo Becker, children's rights advocate for HRW, said Burma is "literally buying and selling children" to fill the ranks.
"The government's senior generals tolerate the blatant recruitment of children and fail to punish perpetrators," she said.
"In this environment, army recruiters traffic children at will."
Ms Becker said that the recent military crackdown had put off many of those potential recruits who were not already deterred by poor conditions and low pay.
"After deploying its soldiers against Buddhist monks and other peaceful demonstrators, the government may find it even harder to find willing volunteers," she said.