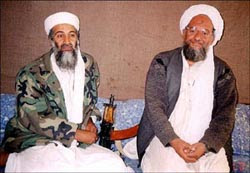 While the Bush administration is intent on pouring more and more resources into the Iraqi civil war, Al Qaeda is staging a comeback with established bases in Pakistan while their ally, the Taliban, is making inroads in Afghanistan. Al Qaeda still poses a threat to the American people and to the people of our allies around the world. Yet, on this issue like others the White House has been asleep at the wheel.

This is the lead editorial from today’s New York Times:

Almost five and a half years ago, America — united by the shock of 9/11 — understood exactly what it needed to do. It had to find, thwart and take down the command structure of Al Qaeda, which was responsible for the deaths of 3,000 innocent people on American soil. Despite years of costly warfare in Afghanistan and Iraq, America today is not significantly closer to that essential goal.
At a crucial moment, the Bush administration diverted America’s military strength, political attention and foreign aid dollars from a necessary, winnable war in Afghanistan to an unnecessary, and by now unwinnable, war in Iraq. Al Qaeda took full advantage of these blunders to survive and rebuild. Now it seems to be back in business.
As our colleagues Mark Mazzetti and David Rohde reported last week, American intelligence and counterterrorism officials believe that Al Qaeda has rebuilt its notorious training camps, this time in Pakistan’s loosely governed tribal regions near the Afghan border. Camp graduates are fighting in Afghanistan and Iraq — and may well be plotting new terrorist strikes in the West.
The same officials point to more frequent and more current videos as evidence that Al Qaeda’s top leaders, Osama bin Laden and Ayman al-Zawahri — once on the run for their lives and unable to maintain timely communications with their followers — now feel more secure. Al Qaeda is not as strong as it was when its Taliban allies ruled Afghanistan. But, the officials warn, it is getting there.
Al Qaeda’s comeback didn’t have to happen. And it must not be allowed to continue. The new Qaeda sanctuaries in Pakistan do not operate with the blessing of the Pakistani government. But Pakistan’s military dictator, Gen. Pervez Musharraf, has not tried very hard to drive them out. In recent months he has virtually conceded the tribal areas to local leaders sympathetic to Al Qaeda. President Bush needs to warn him that continued American backing depends on his doing more to rid his country of people being trained to kill Americans.
Washington also has to enlist more support on the Afghan side of the border. NATO allies need to drop restrictions that hobble their troops’ ability to fight a resurgent Taliban. Afghan leaders need to wage a more aggressive campaign against corruption and drug trafficking. And Washington needs to pour significantly more money into rural development, to give Afghan farmers alternatives to drug cultivation. One reason General Musharraf has been hedging his bets with the Taliban and Al Qaeda is his growing doubt that Washington is determined to succeed in Afghanistan.
Having failed to finish off Al Qaeda in Afghanistan, Washington now finds itself fighting Qaeda-affiliated groups on multiple fronts, most recently in Somalia. Al Qaeda’s comeback in Pakistan is a devastating indictment of Mr. Bush’s grievously flawed strategies and misplaced Iraq obsession. Unless the president changes course, the dangers to America and its friends will continue to multiply.