A trip down memory lane with the Clintons 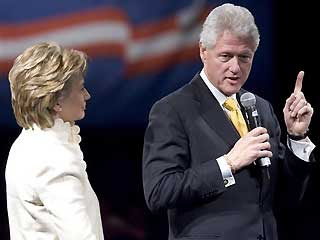 Jeff Weintraub describes a peculiar phenomenon in the U.S. for the past decade and a half known as the Clinton Derangement Syndrome (or CDS for short) which he describes as “a pervasive, almost obsessive hatred of Bill & Hillary Clinton that seems to have infected large numbers of people toward the right side of the political spectrum (and not only them).” We have all suffered through the tirades and bad jokes symptomatic of CDS. It has become part of American political culture.

Yet one does not have to be consumed by CDS irrationality to ask some very fair questions about whether or not Hillary Clinton’s campaign is seeking a third term for a Clinton presidency. Former President Bill Clinton’s recent actions of trading the role of elder statesman for campaign attack dog only reinforces the suspicions that this election has as much to do about putting him back in the White House as it does her. If nepotism rules the day and Senator Hillary Clinton rides the wave of nostalgia for the good old days of the Bill Clinton administration then the two of them need to answer for the less-than-glamorous aspects of the first Clinton rule.

Rosa Brooks has these thoughts in today’s L.A. Times:

… When critics -- Barack Obama among them -- complain that it's hard to figure out which Clinton is actually running for president this year, Hillary responds with wide-eyed incomprehension: Goodness, what's this fuss about Bill? "This campaign is not about our spouses, it's about us," she explained demurely to a South Carolina debate audience. "Michelle [Obama] and Elizabeth [Edwards] are strong and staunch advocates for their husbands, and I respect that." Isn't Hillary allowed to have a supportive spouse too?
Butter wouldn't melt in her mouth.
The problem for Hillary Clinton is that, as usual, she wants it both ways. She wants to be judged on her own merits and not be treated as Bill's Mini-Me. But she also wants to reap the benefits of Bill's popularity, and offers voters the reassuring suggestion that if there's a crisis while she's in the White House, there will be someone around who really does have executive branch experience -- namely, Bill -- to lend a hand.
But the Clintons are playing a dangerous game. The more they remind us of what we liked about Act I of the Bill and Hillary Show, the more they also remind us of what we hated.
It's true that the Bush administration is enough to make anyone nostalgic for the Clinton era. Compared with the catastrophes that President Bush unleashed, Bill Clinton's misdeeds seem like minor peccadilloes. Under Clinton, the United States didn't fall into a potentially devastating economic crisis, didn't rack up record-breaking debts and budget deficits, didn't adopt a policy of torturing people, didn't seek to gut international human rights standards, didn't get bogged down in any major, pointless and unwinnable wars and didn't actively alienate huge swathes of the global population.
On the other hand -- and where the Clintons are concerned, it's always wise to wonder what the hand you can't see is up to -- once you stop comparing the Clinton presidency with the Bush presidency, it no longer looks so great. On the whole, the Clinton era was a time of culture war and scandal, "triangulation" and botched reforms (healthcare anyone?), vacillation and paralysis.
On foreign policy in particular, Clinton's presidency was an era of missed opportunities. In Somalia, Bosnia, Haiti, Rwanda and Kosovo, U.S. policy was marred by hesitation and lack of commitment. Despite impressive rhetoric on the emerging challenges posed by globalization, nuclear proliferation, WMD and the rise of transnational terrorism and nonstate actors, Clinton developed few innovative ways to address these challenges; his approach to conflict and crisis was piecemeal. His early defeat on gays in the military left him so scarred that he steered clear of the military for most of his presidency, passively letting uniformed personnel dictate the terms of too many foreign policy decisions and ignoring hard questions about how to reshape the military to face post-Cold War threats.
Today, if Obama's mere existence at times seems to make Bill Clinton apoplectic, it's not just because Obama (whose foreign policy judgment has so far been significantly better than Hillary's on Iraq, Iran and Pakistan) is the main Democratic barrier to a third Clinton term. It's also that Obama's promise of a politics that's not just bipartisan but beyond partisan is an implicit rejection of the Clintons' all-politics-all-the-time ethos, of their willingness to let crucial national decisions be driven by petty political considerations, of their lack of interest in dealing with big questions when they could coast along with a compromise here, a favor there and some tinkering over here.
Before 9/11, tinkering kept us afloat.
But it's no longer enough. Obama offers something transformative and new, and this frightens some voters, who wonder if he can live up to his undeniable potential. The Clintons, meanwhile, offer something old and familiar. But will a trip down memory lane with Billary reassure voters or end up frightening them even more?

As the article asserts, new times demand new strategies and I hope that Obama's perspective proves to be the one that makes the most resonance with voters.

Until the votes are tabulated, no one will know for sure.