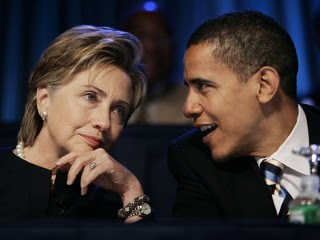 As the editorial in The State below notes, the policy differences between Hillary Clinton and Barack Obama are minute. It notes that the real difference is in how each would approach the presidency and how the nation would respond. The newspaper sees the restoration of the to another term in the White House as triggering all out political warfare whereas an Obama presidency could be unifying for the nation.

However, for many Democratic Party activists the issues of policy differences, leadership style or the country’s reaction to the next president are secondary to the question of who is electable. Right now the shape of the economy and the inability to favorably resolve either of the two wars this country is currently fighting is the torch the Bush White House is passing on to the next Republican presidential candidate. Prospects of a Republican victory are not great but, as noted here before, the Democrats would be fools to just assume a collapse of the Republicans and easy win in November. The election is ten months away giving the Republicans time to pull themselves together and for the Democrats to shoot themselves in the feet.

The race for the Democratic nomination has pretty much come down to a choice between Hillary Clinton and Barack Obama. Who is the most electable? Jonathan Chait has these thoughts:

… it's obviously true that any guess about general election viability is speculative. You're predicting a future event, and you could be wrong. I think the New England Patriots would have a better chance of beating the Giants than would the Lions, but I can't be sure.

That said, the available data here is not very ambiguous. Hillary Clinton is a highly unpopular figure. In the last survey, 50% of respondents have a favorable view of her, and 46% negative. Sometimes her averages goes higher, but sometimes it veers into negative territory. Obama has very high ratings. In the most recent poll, 59% view him favorably, 32% negatively. The difference between plus 4 and plus 27 is enormous--a Lions v. New Patriots-size gap.

On top of that, independents who vote in the primaries and caucuses have shown a very strong preference for Obama over . That is the closest available approximation of a swing voter. (Some supporters have pointed to her strength among lower-income Democrats in the primary, but a low-income Democratic primary voter is not the same thing as a working class swing voter.)

In 2000, ran five points behind Al Gore in the state of , and it's not like Gore was the most popular politician who ever lived. That's who she is--a figure who is disliked by pretty much everybody who isn't a sure-fire Democrat, and even some people who are. You can imagine Obama running a horrible general election campaign and becoming less popular. No doubt his favorable ratings would drop a bit in the face of Republican attacks, as would hers. But for him to become as unpopular as already is--without months of nation-side attack ads--is a worst-case scenario.

It's entirely possible could win if given a favorable environment and/or a sufficiently weak opponent. (Whether she could bring along as many Democratic Senators and Representatives is more doubtful, which is why so many red state Democrats are endorsing Obama.) And I'm not saying electability has to be a first-order consideration--if you think would be a much better president than Obama and are willing to accept a higher risk of a Republican winning, then go for it.

That so many Democrats think this question is complicated suggests to me that maybe people aren't good at assessing the popularity of their co-partisans. To Democrats, it's perfectly obvious that the strongest Republican nominee is John McCain. He polls very highly, everybody knows Democrats and Independents who like him, and so on. But Republicans are constantly debating this. You see Republicans spinning horror scenarios of a McCain nomination leading to a splintering base or depressed turnout. To Democrats it's bewildering that they even debate this. Lots of Republicans feel the same way about the Clinton/Obama electability debate.

Democrats would do well to pay heed.

Thus whatever party can draw the strongest coalition of support and be the most unified behind its candidate will win the election.

The leadership of both parties are debating this very matter right now.