What impact will the Warner-Gilmore Senate contest have on the Obama-McCain Presidential race in Virginia? 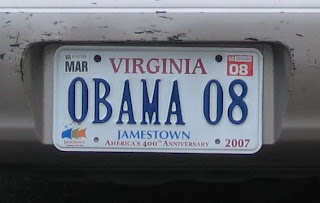 Since the end of September, all but one public poll not only have Barak Obama leading John McCain in Virginia but have him at 50% or higher. Is Obama going to carry Virginia?

The last time a Democratic Presidential candidate carried Virginia was in 1964 and the time before that was 1948. Given that 1964 was a Democratic landslide, it is pretty safe to say Virginia has been safely in the Republican column since 1952. As civil rights challenges arose across the nation, white political elites in Virginia as throughout the South, moved from the heterogeneous Democratic Party to the more homogenous Republican Party.

Yet, demographics in the state have changed. Black political activists have become very much part of the Virginia mainstream and are no longer seen as a threat to the white establishment. The suburbs are increasingly voting Democratic as more and more people move into the state that are more attuned to national sensibilities than the old Virginia traditionalism. And, of course, is doesn’t hurt that the Virginia Republican Party is imploding as it drifts further and further to the right away from the Virginia electorate.

Will Obama carry Virginia? The Kerry campaign was hopeful in 2004 but soon pulled their staff out to put them in more productive swing states. But despite history, the polls are pretty solid for Obama three weeks before the election.

It is almost unbelievable that these numbers will not tighten up before the election but we do have an interesting situation with the Virginia Senate race that might help the top of the ticket. The conventional wisdom is that coattails only work from the top down. However, the very popular former Democratic Governor Mark Warner has an incredible lead in the race for Virginia’s open Senate seat over the unpopular former Republican Governor James Gilmore. Will the Warner massive lead pull enough votes for Obama to take the state?

Here is Sridhar Pappu in the Washington Independent on the Virginia race:

More than a fund-raiser, or even a grand photo-op, the event signaled just how powerful a grip Warner has in his Senate race to replace retiring Republican stalwart Sen. John Warner. Some polls have the widely popular Warner leading by as much as 30 points over his GOP rival, Jim Gilmore. The state long considered a Republican fortress seems poised to have two Democratic senators, in addition to a Democratic governor.

One would think that such circumstances would shine brightly for Sen. Barack Obama, the Democratic presidential nominee, who’s campaigned vigorously throughout the state. But the challenge for Obama is tough. Virginia hasn’t gone for a Democratic presidential candidate since Lyndon B. Johnson in 1964. The presence of military bases in the state have created a solid conservative voting bloc that most always votes for national Republican candidates.

But if you haven’t noticed, we’re in once-unimagined political territory this campaign season. The more one travels the country, the more one realizes that the old party affiliations have begun to crumble. More and more people are declaring themselves independents — voting from their guts and their pocketbooks. This all makes Virginia a state very much in play.

With a little less than a month from the election, Obama leads Sen. John McCain by four points in the most recent CNN/Time/Opinion Research Poll. This is the Virginia that McCain, in late May, enjoyed a 9 percentage point lead in a poll taken by Virginia Commonwealth University, according to a recent CNN.com story.

“What you’re seeing now is the opposite of what usually happens,” said Cordel Faulk, director of communications at the University of Virginia’s Center for Politics. “Warner, the Senate candidate, is actually helping Obama.”

But the question remains, how much?

Looking at comparable races across the country, nowhere is there the kind of disparity of poll numbers for a Democrat in a open statewide race versus the top of the national ticket. In Colorado, Democrat Mark Udall leads by four percentage points over his opponent, a number that closely mirrors Obama’s state numbers. In New Mexico, Tom Udall has opened up a 14-point lead over his opponent, while Obama averages a seven-point advantage over McCain.

Neither case shows anywhere near the gap between the lead Warner enjoys and the dogfight Obama’s in. So, like, what gives?

To answer, one need not look any further than Potts, a disaffected Republican known for saying what he wants when and where he wants to. In a long conversation Wednesday, Potts pretty much railed against all things Republican — the Bush administration, the war in Iraq, the damages to this country’s infrastructure and economy.

“The grass-roots efforts of the Republican Party in Virginia have been pathetic,” Potts said. “The far right has frightened off so many people. You have a Republican meeting here, and 12 people show up — and it’s the same 12 people wanting to talk about social issues when Rome is burning.

“We’ve got the worst economy in god knows when, and they want to talk about Bill Ayers or abortion. Meanwhile we have a president, a Republican president, who’s presided over the largest deficit in the history of mankind, and they don’t seem to care. The Republican Party in Virginia is like an alcoholic — you have to hit the absolute bottom if you want to turn it around.”

After he spent several minutes praising Warner and trashing Gilmore and McCain, Potts got around to Obama.

“I have not decided who I’m going to support,” said Potts, whom you might have expected to break out into a chant of “Yes, we can!”

“I’m extremely disappointed with McCain. He’s run a lousy campaign. Their message has been off, and to top it all off — he chose someone completely unqualified to be a heartbeat away from the presidency. But I’ll still weigh everything.”

Potts’ ambivalence demonstrates just how far support of Warner can help Obama. After remaining neutral through the primaries, Warner formally endorsed Obama in early June at an event in Bristol, in conservative southwest Virginia. He next teamed with him in August, in Martinsville, where Warner remains popular because of his efforts to bolster the region’s economic base.

The truth of the matter is Virginia is a difficult state to, well, “get.”
In interviews with influential Republicans, Democrats and longtime observers of the state’s political trends, it becomes apparent that Virginia doesn’t behave the way people seeking a simple solution would like.

Race cannot be considered the overwhelming factor, just as the Warner’s popularity does not seem to transfer to the top of the national ticket. The state is trending Democratic — but toward Democrats that fit neither the northern liberal ideal or that of the Old South. Population changes have made Northern Virginia fertile for Democratic victory, but the defense industry’s interests still loom large, and has many tilt toward McCain.

Of course, the one issue rampaging in this campaign, with everyone running from it in mortal fear, is race.

The dynamics of racial politics resonate in Virginia, the state that elected the nation’s first black governor, L. Douglas Wilder. In his historic 1989 bid, Wilder held a double-digit lead in polls but won by only one-tenth of a percentage point. Many political analysts since have cited this election in saying that while white registered voters might tell pollsters one thing, they will not admit that they cannot vote for an African-American.

The truth is we won’t know if “the Wilder effect” will be applicable to Obama until after Election Day. What we do know is that despite all the literature and joint appearances — and even a remake of “I SPY” where Warner and Obama reprise the roles of Robert Culp and Bill Cosby — linking the success of the two campaigns will prove difficult.

What Virginia represents is a more nuanced political future. Yes, Warner — like Gov. Tim Kane and Sen. Jim Webb — belongs to the Democratic Party. But he, like Webb and Kaine, enjoys success as an individual that Virginians trust. Whether they’re Democrats seems beside the point.

“It’s just hard for me to see the effect a Senate race would have on a presidential race,” said Frank Atkinson, a venerable figure in Virginia politics who served in Ronald Reagan’s Justice Dept. and also as policy director for George Allen during his time as governor. “It’s possible there would be some, but the two campaigns are framed differently.

“Obviously you have a very close race — which is not really surprising,” Atkinson continued. “My thesis is that I’m tired of Virginia being described as a red state. It’s still considered a red state because of the way it’s voted in presidential races — but you should really consider the state purple.

“This is a state of winning streaks,” Atkinson said, ” In the ’80s it was dominated by Democrats. In the ’90s, it was the Republicans. Now in the 2000s we’ve seen a Democratic decade. I don’t think Virginia is a strong candidate to tip blue in a strong election — namely because of the strong Republican voter concerns about homeland security issues.”

But Atkinson, like many others, agrees that should external circumstances remain as they are, Obama might have the best chance since President Bill Clinton in 1996 to bring the state to the Democratic side of the ledger.

It might be true that Warner’s popularity can position Obama to win. But Warner cannot carry the day for the Democratic nominee, cannot let him glide in on what will most likely be a monstrous Senate victory.

Instead, Obama — so fond of basketball — has been delivered a decent look at the basket by Warner. Whether he can actually make the shot will be up to him.

You can read the entire article here.
Posted by Sisyphus at 9:48 AM

Much of it too is that Virginia is no longer considered by many to be a southern state, since its population demographic has changed so dramatically over the years.

I think these days it's far more along the same lines as Maryland or Delaware---Mid-Atlantic.