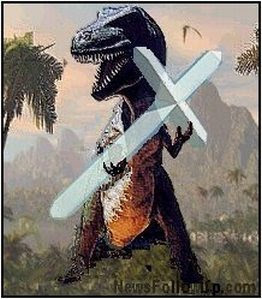 The Creation Museum is about to evolve into a larger facility. A $500,000 upgrade is planned because the facility has surpassed initial expectations for attendance. Six months following its opening, over 250,000 walked through its doors – the number expected by the end of the first year.

This facility in Northern Kentucky is the first museum in the world dedicated to the creationist interpretation -- i.e., a literal biblical explanation -- of how the earth began. This includes those pesky dinosaurs whose bones keep showing up all over the world. They are shown here along humans in the world’s 6000-year existence. And, of course, Adam and Eve are positioned in such ways as to maintain their modesty – just the way God intended. They also have computer animation of how all those animals actually fitted in Noah’s Arc.

This is how Ken Ham, the director of the museum, explains the beliefs guiding the museum’s founders:

We believe that the intelligent designer who created the world and all the living things is not just any god, but the Creator God of the Bible. The view of molecules-to-man evolution can't be fit into the Bible if one takes Genesis as literal history-just as the New Testament writers do, and Jesus Christ does. Those who believe in evolution accept that millions of years of death, disease, and suffering led up to man's existence. The Bible makes it plain (e.g., the apostle Paul in Romans 5) that death is an intrusion because of man's sin. Evolutionists believe the fossil record is a record of the history of life over millions of years. But such death and disease (like cancer in dinosaur bones) could not be described by God as "very good" as He did when He finished the creation. Most of the fossil record is the graveyard of Noah's Flood.

Here is how the L.A. Times described the opening of the museum last spring:

The Creation Museum, a $27-million tourist attraction promoting earth science theories that were popular when Columbus set sail, opens near Cincinnati on Memorial Day. So before the first visitor risks succumbing to the museum's animatronic balderdash — dinosaurs and humans actually coexisted! the Grand Canyon was carved by the great flood described in Genesis! — we'd like to clear up a few things: "The Flintstones" is a cartoon, not a documentary. Fred and Wilma? Those woolly mammoth vacuum cleaners? All make-believe.
Science is under assault, and that calls for bold truths. Here's another: The Earth is round.

Sadly, the expansion of the museum probably reflects an appeal of pseudo-scientific explanations for life on earth. According to a poll cited by the Detroit Free Press, “51% of Americans think God created humans in their present form. Just 15% said that humans evolved and God was not involved.” There are those all to willing to take advantage of and profit from the ignorance of others. As P.T. Barnum put it, “A sucker is born every minute.”
Posted by Sisyphus at 8:35 AM

scary isnt it?? and those people VOTE!!!!!!!!!! no wonder why this great country is screwed up!!!!!
thanks for sharing